The tale of Theodore told by Amelia

Dad had Theodore outside and turned away for a minute. When he looked back Theodore was gone. He called for him, but Theo never came.

My mom went to five houses a day asking if anyone had seen him, the newspaper put an ad in the paper for free, the police investigated every lead and phone call, we hung up almost 200 posters in the surrounding towns, and people we didn’t even know shared Theodore’s picture on Facebook. He was now missing for 17 days. We thought he was surely dead, a small dog like him couldn’t survive where we lived with all the owls and coyotes.

But then one day, my sister and I were at school when we heard that he had been found! Apparently, a lady 10 miles away from where we lived had been standing outside her house talking to her friend on the phone when a small dog ran down the road before her. She told her friend and her friend said that the dog was all over Facebook and lost signs were everywhere. The lady called Theodore’s name and he bolted inside her house. She dialed my father’s cell phone number and said that she had our dog. We had gotten fake calls that someone had our dog about two days before, but the lady described Theodore perfectly. Dad drove to the lady’s house and got Theodore back. He was really dirty, hungry, and terrified. It took him three days to act like himself again.

Now we keep a really close eye on Theodore whenever he’s outside!

Here are a few more pictures of Theodore and his pal, Nico. 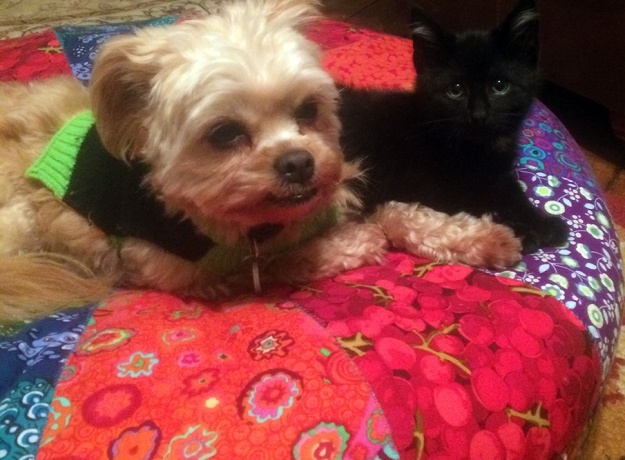 This tale was shared by Amelia, a fellow blogger who participated in “Tuesday Tale-What Is Your Pet’s Tale?”. If you would like to participate, click the link for details.

Thank you Amelia for sharing this story. Facebook can be used for some great things! I am so glad Theodore was found by a kind person and he is home safe! He sure looks like a happy, content dog below.

You can check out Amelia’s blog and find out more about the cat in the photo here.

(Others who have sent me their tales, thank you! I WILL be using it in one of the future “Tuesday Tales”)

5 thoughts on “This Tuesday’s Tale Is Your Story”