This is a tale about a little toy poodle.

There was a couple that had three small children and decided it was time to bring a furry friend into the family. So, one day they all took a drive. The children were told that mom was stopping to get some yarn.

Mom went inside to find a litter of puppies so energetic, so full of wiggles & wags. There was one puppy that caught her eye and she knew he was the one. Mom said the puppy actually picked her. (It seems our pets choose us in most cases, doesn’t it?)

She carried the puppy close to her, hidden, so the children would think it was a black ball of yarn. Surprise! The three children were so excited! They loved this dog so much, especially the youngest one and he soon became the mom’s baby, her “other child.”

Since it was such a tiny puppy, he slept in a box that was open on the top at night with blankets and an alarm clock. They heard the ticking noise relaxes and comforts a puppy. Eventually he wound up sleeping in the beds of his family members. (Pretty typical, right.)

The house became known in the neighborhood as the house with the little black poodle. Everyone would see him outside as they drove by the house that was on a corner.

This puppy and the children grew up alongside one another. The youngest child became quite attached to the dog. He was there when she was teased in school, when her mom & dad went through a divorce, through fights with her girlfriends, and boyfriend troubles. Whenever she was sad, he was right there giving her kisses and comforting her. (Dogs are amazing! Angels from heaven!)

Over the years, habits had formed like watching out the window whenever the family was gone, being SO excited to get his own stocking every Christmas, peeing on the corner side table in the living room, and growling if you went near his bone. (Habits, good or bad, human or animal, are something families form and work through together.)

One morning the youngest child went to look for him, as she did first thing every morning, but she couldn’t find him. She asked her siblings, they said that he was outside. She went to the door and saw the bundle of black curls not moving and looking lifeless. Devastated she quickly realized he was gone. Her best friend had died.

Hysterical, she and her siblings called their mom at work. She and dad came home so the family could bury their beloved pet of 15 years in their backyard. There were many, many tears.

This was a very difficult time for the family. The youngest girl even heard the jingle of the dog’s collar tags, just like she always heard whenever he would come running up the stairs, only to wake up and realize it was only a dream.

The little black poodle was named Kurly, and the youngest girl was me. Below is a photo of Kurly. It isn’t the best quality photo, but it is a photo from around 30 years ago. 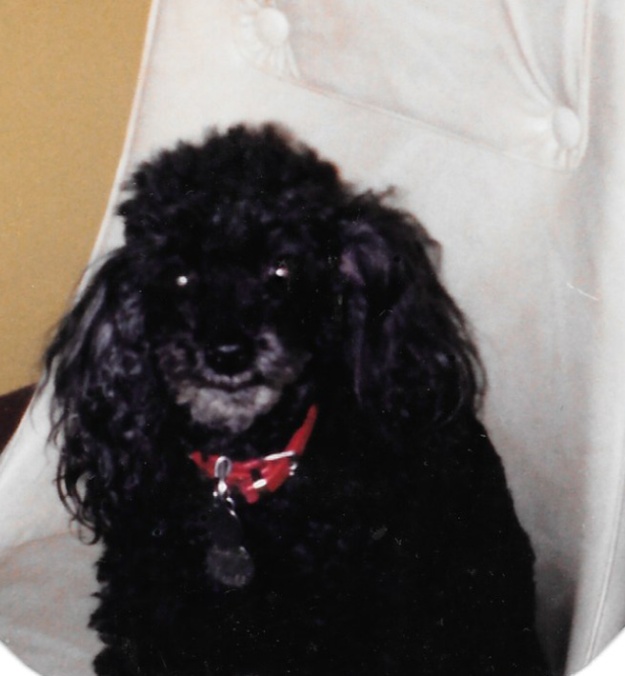 To this day, there is a wooden cross in the backyard of our family home marking where Kurly is buried. That collar with the jingly tags is something I couldn’t part with. I still have it in a keepsake box.

I still miss Kurly and still cry when I think of him. In fact, I became very emotional looking at this picture while creating this post. I miss you Kurly and I hope to see you again one day. Rest in the arms of Jesus. I love you!

2 thoughts on “This Tuesday’s Tale: Kurly”