I personally wasn’t able to relax for a few days this week. We ordered a new couch in October and had received notification this past week that it was in and the delivery company would be in touch. A little back story on this…

I do not purchase big items very often and when I do I usually research for hours, or even days, before making a decision. Our old couch was over 20 years old. So in my search I fell in love with a couch I saw online that a friend shared with me but knew it would be too big for our space. We already had a pretty big couch and this one would be bigger. So I kept looking online and stopping in some furniture stores. There it was, one I thought would work. It was the color I wanted and had the buttons on them I liked on the other couch that would be too big. I spoke with a sales person about my biggest concern which was delivery and getting it in our second floor home. The sales person said this couch has been having some trouble getting in to homes so she proceeded to grab a tape measure and we discussed it more. I still had doubts so she brought me to the manager who also measured, looked up the information on the computer, and told me what measurements the door and the ceiling needed to be for them to get it in. I went home and carefully measured everything, spoke with the manager again, and told him I was concerned about ordering it if there were doubts because we couldn’t afford a restocking fee just to not have a couch in the end. He was convinced it would be fine so I ordered it.

Delivery day came and sure enough they could not get it in the door. I pleaded with them to take the packaging off to see if it would fit without the extra bulk, but they said they are not allowed to do that. He told me I needed to pick out a smaller couch or they could leave it there and we could have friends come over to get it in. It’s winter, this day we were in the middle of a snow storm, it was a week day when everyone is working, and we’re in the middle of a pandemic. For those reasons and various other ones, this was not an option. I kept brainstorming and asked if they could bring it in over the deck. He looked at the width and height of the sliding glass door, took pictures, and said he would call his boss. He came back with a yes but it wouldn’t be for a few days, they would need to bring 4 guys so it would cost more, and that I still had to pay for the “attempted delivery.” Ugh.

With knowing the new couch was being delivered I had gotten rid of my old couch earlier that day and so now I had no couch. Whaa, whaa, such problems, I know. I wasn’t as concerned about not having a couch for a few days as I was about the money we were putting out just to get it in here. The kicker is I purchased it at a discount store, well there went the discount.

Evening came and I wanted to watch a movie. Cino likes to lay in my lap but all I had was a big chair to sit in. I kept trying different things to help her be comfortable so she could still lay on my lap. She likes to sprawl out and there just wasn’t enough space or cushion on the chair for this. So she eventually jumped down and gave up. None of us were very comfortable for a few days.

I wondered what Cino would think of the new couch. She checks out any items brought in to her space/home very carefully. She needs to eye them up & down, approach cautiously, and give them the sniff test. Much consideration is needed before approaching from a new little basket to something as big as a couch. Well here are a few pictures of her with the new couch. 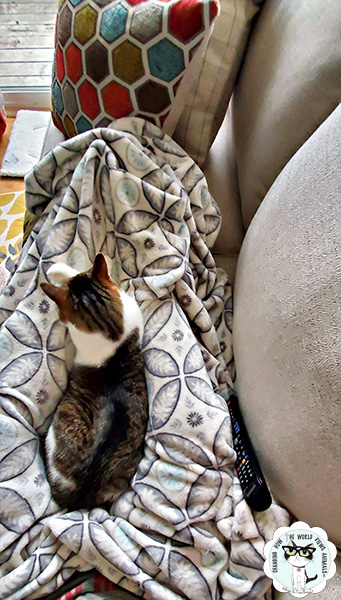 No, I’m not moving for bed time. This spot will do.

I think we’re good! Now we can all relax.

Here is an image of the entire couch.

5 thoughts on “Sunday Pause (Paws): Ahhh…Relaxing On A New Couch”