The Tale of Odin as Told by Irene

Odin is usually a happy boy at 4 years old. He loves our long walks in nature, where he can run free without his leash. He was early taught not to hunt, so when he meets a rabbit, he just stands quiet and lifts one paw. Then I tell him, that the rabbit lives here, just go on straight and he listens. This is so well acted of him, which gives himself more freedom, while we are out in nature. 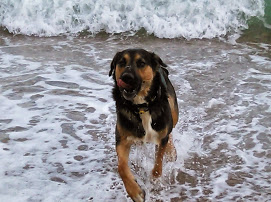 All photos taken by IreneDesign2011

Odin was raised with our 2 cats who are now 14 years old. They told him very fast, who were the kings of the house, so now he knows, he will only be the crown prince, no matter what, and he does accept that in a very good way.

Cats are cats and sometimes Hvide gets the idea to hunt Odin around in the garden, which looks so funny. A big dog first and a small cat after. I wish, it was possible to catch it with a camera, but I’m not fast enough, before the hunt is over again.

In the garden Odin takes good care of his older brothers. No other cats are allowed to pass our garden, then he hunts them out again. He has seen, that a stranger cat came inside the garden and attacked Hvide. After that day he got very alert to take good care of the brothers.

After being ill for some weeks, Odin is on his way to recovery.

Thanks for sharing Irene! Irene and Odin live in beautiful Spain and, as you can tell, enjoy it by taking walks in nature and by the beach. I really love how Irene taught Odin to respect other life! My kind of gal!

Irene told me Odin is on medication now but recently did have to go back to the vet for more tests. They are waiting for results of a blood test to see if there are any genetic illnesses. You can read about what has been going on with Odin by visiting Irene’s blog post, Update at Odin. Please pray that all is well with Odin and he will fully recover soon.

You can find more tales on the “Tuesday Tales” page of my blog. Let me know if you have a tale to share.

8 thoughts on “This Tuesday’s Tale: Odin”