Someone I know shared the following pictures of an opossum that frequently visited her and her family for a season.

This opossum started showing up on Sylvia’s deck one winter. It didn’t take long to realize she was trying to get into the barbecue grill figuring she could smell the grease. Sylvia decided to go on the internet to see what possums liked to eat. Then Sylvia started putting food in a can and tied it to the deck sliding door so that it would alert her & her family whenever the opossum returned. They fell in love with her and named her Polly.

Whenever Sylvia heard that can bang at 2am she would get up just to watch her. One night, Polly showed up with another opossum that was bigger. Maybe it was her mom or maybe a mate. 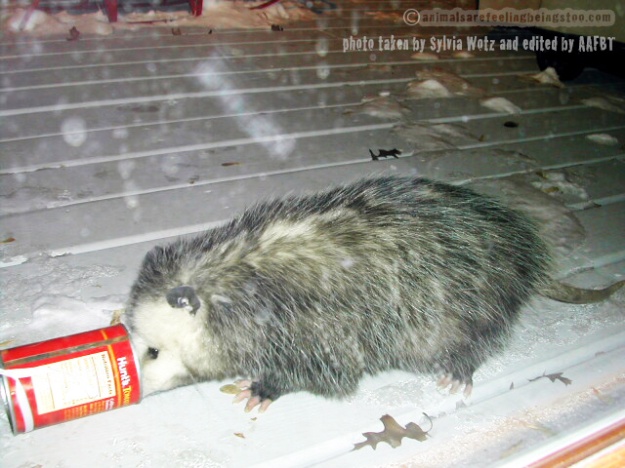 On Christmas Eve the family sat and watched Polly put on a show for them. 🙂 They watched her for weeks on end and then they never saw her again. 😦

So what do you think of Polly the opossum?

Being kind to animals means being kind to ALL animals. It doesn’t matter if they are big or small, furry or slimy, cute or ugly. ALL are living, feeling creatures.

Below is a post on the Fox Wood Wildlife Rescue, Inc. Facebook Page about the struggle for survival for opossums during the winter.

So you see they are just trying to survive. Aren’t we all?

Please be kind to ALL living creatures and consider sharing this post so we can spread the word and save some opossums and other wildlife seen as a nuisance.

8 thoughts on “Polly the Opossum”