It’s Sunday! Time to kick back, relax, and welcome the first day of “Be Kind To Animals Week”.

I wanted to honor this recognition of animals with this Sunday’s post. But we at AAFBT think you should always be kind to animals. In fact we now have a mission statement and here is Cino as “Animal Paladin” to introduce it to you… 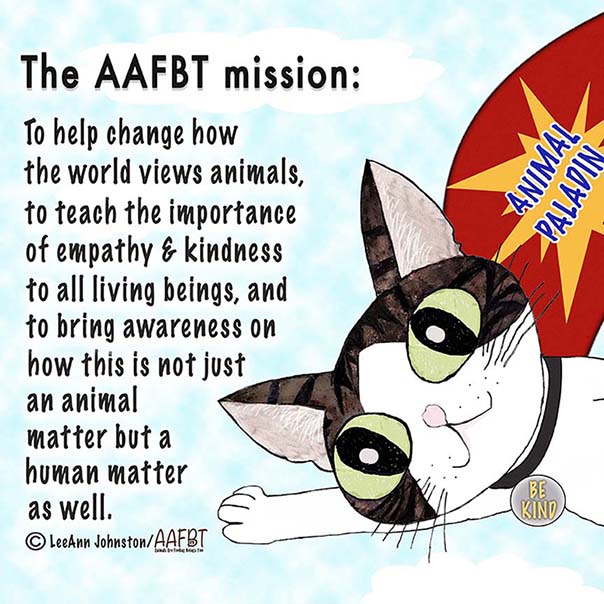 I like to say to help animals it takes me, it takes you, it takes WE and that is so true. Here is a great example. A coworker of mine was dropping her son off at school and there on the edge of the sidewalk was a little duck in her words “crying.” He was laying on his side crying and shivering so she gently pushed him in the upright position but he kept falling over. So she picked him up and brought him to work with her. The timing was unbelievable because one of the parents at our school is a veterinarian and she was there dropping off her children when my coworker brought in the little duck. The vet checked him over and said he was weak and starving and needed to be cared for. So another coworker of ours who isn’t on the clock until lunch time came to pick him up and brought him to a wildlife rescue. Isn’t that awesome?! A group effort and this little guy is going to be just fine!

Not everybody is kind to animals which is the main reason why I have this blog. I want to be their voice. Not being kind to animals isn’t just about dog fighting or harming cats because some people just don’t like them. It’s about factory farms, animals in entertainment, and experimenting on them. This is the abuse that happens mostly behind closed doors everyday in our society and is allowed.

Animals need us! They really do! It is how it was planned.

Here is a poem I wrote.

BE KIND TO ANIMALS

This week is designated as
“Be Kind to Animals Week”
To those who meow, bark & neigh
And those who moo, oink, & squeak

Let’s celebrate this recognition
But also fight with our voice & pray
One week is not nearly enough
“Be Kind to Animals” is needed every day!

©LeeAnn Johnston/Animals Are Feeling Beings Too

I didn’t make the following image for this post but it seemed to fit right in here.

I will leave you with a verse from a poem by Edgar Guest called “On Kindness to Animals.”

They cannot ask for kindness
Nor for our mercy plead,
Yet cruel is our blindness
Which does not see their need.

Do you have any animal rescue stories? If so, I’d love to hear them in the comments.