From the day we are born we learn about our world by our surroundings. We learn from those around us; our family, friends, peers, teachers, etc. We pick up habits, traditions, and even beliefs from others. But one day we hopefully figure out who we want to be, think for ourselves (not necessarily just following the crowd), and that means we may come to see some things differently than what others may see as “normal.”

Because certain things in our surroundings/society are seen as “normal”, people don’t necessarily think about what they say, assuming everyone feels the same as they do.

An example of this is recently a delivery person who was bringing supplies to my place of employment started talking to me about how he was recently out bear hunting. I immediately tensed up. He went on to give me details about how it wasn’t easy but he got him. He explained how he set the traps and had to travel quite far to pursue him. He was so proud of this. All the while he is telling me this I am thinking “do I tell him I do not want to hear this?” and  “do I tell him that I am an animal advocate and that I care about all living beings?”

END_OF_DOCUMENT_TOKEN_TO_BE_REPLACED

It’s Sunday! Time to kick back, relax, and spread a little kindness.

I came across a video clip talking about kindness and they called it a super power.

Here is the video:

Everyone could use some of this these days, including animals. END_OF_DOCUMENT_TOKEN_TO_BE_REPLACED

The definition of the word “time” when used as a verb is plan, schedule, or arrange when (something) should happen or be done. Obviously we need to go by time to be at work, meetings, appointments, events and so on. But today I am looking at the words “when things should happen.”

I was looking through some old piles of papers, notes, cards, etc. in my office and came across some of the cards I received when my sister suddenly passed away a few years back. For quite a while I couldn’t look at old pictures of her or see her name come up in a Facebook memory without breaking down and crying.  While it still makes me sad, and sometimes I still can’t believe it’s real that she is actually gone, time has begun to heal my heart.

Speaking of my office, it is still a mess. I haven’t done anything in there for a few months or more. But this weekend I decided to try to weed through some more of it. I am taking my time with getting it in order and decorated because I don’t want to rush and just throw things in closets or just anywhere. I want to throw away whatever I can or bring items to Goodwill that I no longer will use. I want it to be somewhat organized so I can utilize things better and have the room and space for plans that I would like to bring to pass for my blog and animal advocacy. END_OF_DOCUMENT_TOKEN_TO_BE_REPLACED

These days there isn’t much to do so a lot of people don’t have any real big plans for the weekend.

Do you have any plans?

*Remember to always 🐝 kind to ALL animals.

All we have to do is look around to see that the world is in chaos. I don’t see how this will change things.

There is so much going on and yes, there is some good in there, but the bad and the ugly really seems to be coming out.

We’re battling a pandemic, there is looting and violence going on everywhere, and it’s election year.

Some say the pandemic is a hoax. Some are against wearing a mask. The truth is nobody likes wearing a mask. But if there is even a minuscule chance that wearing one will save someone else’s life (or your own), shouldn’t that be enough?

When it comes to elections I would be curious to see how many people actually learn the facts, views, and plans on both sides before they start criticizing the other candidate, the candidate supporters, and before they actually cast their vote. I suspect there are many people who focus in on one thing they are angry about or just listen to what others are saying without finding out the facts and making their own decisions. Elections in themselves never bring out the good in people. This is when you can see people at their ugliest. Everyone is so passionate about their beliefs which there is nothing wrong with. What is wrong is when people become so blatantly cruel toward those who do not believe the same as they do.

When I first became an animal advocate END_OF_DOCUMENT_TOKEN_TO_BE_REPLACED

Who out there likes food? Just kidding. I think it’s safe to say we all do. Some of us like it a bit too much. 😁 But what kind of food we like is different.

I am a vegetarian and may some day be vegan. I have never been a big fan of meat, it always bothered me that I was eating an animal. About 5 years or so ago I decided I couldn’t do it anymore. I can’t eat what I advocate for. I always thought if I fought for humane treatment of farm animals that was good enough. But it’s not. I don’t believe we were meant to eat them and that we do and consider it “normal” is just part of the fallen world.

I am not trying to make any of you feel guilty. But I do hope you give some thought to it. There are many plant based and dairy free foods out there that are very delicious and that you can have a lot of fun with.

I haven’t eaten a White Castle in forever. But after trying this, I’ll be a more regular guest.

Have you tried it? Or any food with Impossible meat? If not, I challenge you! You’ll love it!

2020 hasn’t been so fun
We’re ready for it to be done
Masks, sanitizing…I’m sick of this crap
So if you’ll excuse me, I’m getting back to my nap

After all that’s what Sundays are for. Cino woke up to say hi…but only for a minute.

It’s Sunday! Time to kick back, relax, and be cool.

Right now, where I live, stepping outside is like stepping into a sauna. It’s very steamy. So we’re doing our best to stay cool.

END_OF_DOCUMENT_TOKEN_TO_BE_REPLACED

It’s Sunday! Time to kick back, relax, and stay in the moment.

Restaurants and stores are opening back up, people are going back to work, and people are starting to gather. This trying time is far from over but we’re getting back to our lives (somewhat).

Normally many of us find ourselves on a never ending merry-go-round finding it hard to rest and just be. Some are afraid to because if they allow themselves to rest or sit in quiet, instead of chaos, they may have to think about or face something they don’t want to but maybe should. I have been given the challenge before to just sit in complete silence, to just be, and to set aside all of my worries, focus on just one thing, or just clear my mind. Have you ever tried that? It is not as easy as you may think. Before you know it your mind is wandering back to the to do list or worrying about something. It’s amazing how hard it is to truly just be in the moment.

We can certainly take lessons from our pets on this as this image below wonderfully portrays. 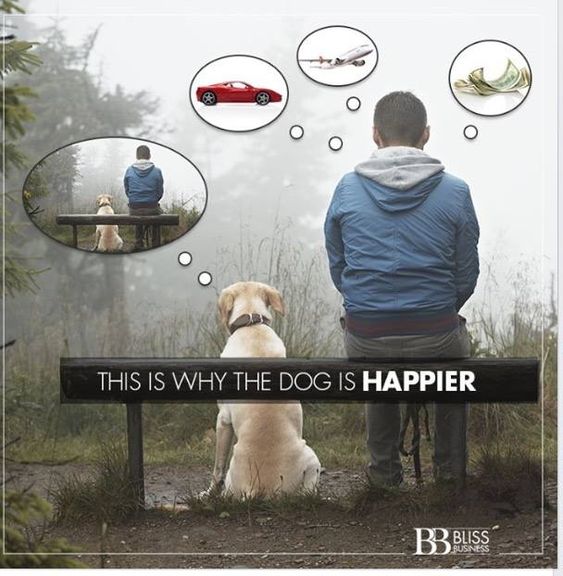